Sugar and the Effects It Has on the Brain

Sugar and The Effects It Has on The Body 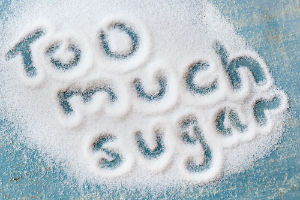 Sugars are named in 61 different ways due to years and years of genetically modifying the way they are produced. Glucose, fructose, honey, high fructose corn syrup, the list goes on and on. Although we are all curious as to how these processed sugars are produced, the real question is what are these sugary syrups and hard candies doing to our bodies. These sweet solutions not only affect us in a biological manner, but also the way our brains function.

WHAT SUGAR DOES TO  YOUR BIOLOGICAL PROCESSES

Eating sugar-sweetened foods and beverages has been identified as the cause of a large number of health issues. These health issues include being overweight, or even obese, type two diabetes, and metabolic syndrome. Sugar slows down your biological functions in many ways. In 2012, a Harvard university study found that people who drink about one can of soda a day automatically increase their risk of chronic heart disease. Participants who drank the least soda had dramatically lower risk of heart attack, seeing as those who drank the most soda had a 20 percent higher chance of a heart attack. The intake of sugar also affects the way other organs, such as the lungs, function. Scientists linked sugar and soda consumption to elevated risk of pulmonary complications, such as Chronic Obstructive Pulmonary Disorder (COPD). Dr Zumin Shi, a researcher at the University of Adelaide, stated that “The amount of soft drink consumption is associated with an increased chance of asthma and/or COPD”. She also stated in one of her 2012 studies, “There exists a dose-response relationship, which means the more soft drink one consumes, the higher the chance of having these diseases”. Biological processes are not the only aspect of the human body affected by excessive amounts of sugar. Mental processes are also greatly affected, as well as common dental hygiene. 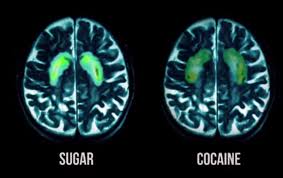 WHAT SUGAR DOES TO YOUR NEUROLOGICAL PROCESSES AND TEETH

Dr. Mark Hyman, M.D., founder and medical director of UltraWellness Center, stated during a recent interview on HuffPost Live that sugar and cocaine both make your brain “Light up like a christmas tree”. This is because when sugar and cocaine reach brain receptors, they trigger almost the exact same response and produce nearly the same amount of dopamine. Dopamine is defined as a compound present in the body as a neurotransmitter and a precursor of other substances including epinephrine. When the brain’s receptors release dopamine it triggers a feeling of relaxation and pleasure, which trains the brain to crave substances such as these. Once the brain is trained to crave and seek out these substances it becomes
an addiction. A 2012 study on rats conducted by researchers at the UCLA, found that a diet high in fructose (a form of sugar) takes quite the toll on the way you learn and remember things by literally slowing the brain’s activity. Heavy sugar intake caused the rats to develop a resistance to insulin, the hormone that controls blood sugar levels and regulates the function of brain cells. Artificial sugars were also found to breakdown and rot teeth overtime. Each time you sip soda sugar bonds with bacteria in your mouth, giving rise to acid. This acid weakens enamel, which o

ver time leads to bacterial plaque and can eventually cause cavities. Soda also lowers the PH of the saliva, boosting bacterial proliferation and dental erosion. The biological and neurological side effects that excessive amounts of sugar causes is shown in many case studies, which we will talk about next.

Research shows that the average American eats three times the daily recommended amount of glucose, which is 139 calories from sugar. The World Health Organization also recommends that 5 percent of daily caloric intake comes from sugar, however the average American daily diet is made up of 13 percent calories from sugar. Glucose, fructose, honey, and corn syrup are found in 74 percent of packaged foods in supermarkets. Sugars also affect the media and how we advertise food. We now show all these sugar filled foods as energizing and fulfilling, however they are nothing of the sort. Sugar is highly addictive, just like any drug. Excessive amounts of sugar also have very similar side effects to other drugs, a high followed by a crash. Just like alcohol gives one a hangover or marijuana leaves one with a unfulfilled feeling, sugar has this same effect.

Artificial sugars are praised now more than ever, but what we aren’t paying attention to is what it does to our body. Sugar practically rots one from the inside out, leaving them with nothing but a meaningless sugar high. And as they say, everything that goes up, must come down. It’s time we began paying attention to our mental and physical health, and how artificial sugars harm both. It is just as addictive as any drug, and it’s time for some rehabilitation.