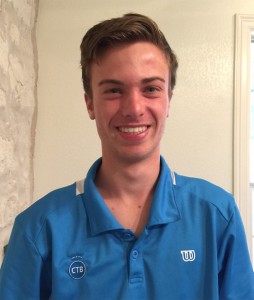 AESA Prep Academy may be small, but its students achieve on a grand scale. Senior Kyle Brown has been selected as a National Merit Scholarship finalist, one of only 15,000 seniors in the country to receive such a distinction.

“I do consider it an honor to be a part of such an elite group on a national level, especially coming from such a small school,” says Brown. AESA Prep Academy, in southwest Austin near the town of Dripping Springs, keeps its enrollment around 100 students in grades 2 through 12 so that students can receive more individualized attention. “The teachers at AESA have played a big role in helping me achieve this.”

Brown, who is interested in pursuing a degree in neurobiology, will go on to compete for 7,400 Merit Scholarship awards. Brown has twice won AESA’s Most Significant Person in History competition and has been voted most distinguished speaker at the school’s Model UN. He is being courted by Ivy League schools and other prestigious universities throughout the country.

“We are thrilled, but not surprised, that Kyle has received this great honor,” says Barbara Garza, AESA Prep Academy’s head of school. “Kyle is our first National Merit Scholar, but with the students coming up behind him, I’m sure he won’t be our last.”

Any cookies that may not be particularly necessary for the website to function and is used specifically to collect user personal data via analytics, ads, other embedded contents are termed as non-necessary cookies. It is mandatory to procure user consent prior to running these cookies on your website.