Jk Rowling and What She’s up To

JK Rowling and What She’s up To

For all of the Harry Potter fans out there I have some marvelous news!!! JK Rowling has recently given us something to look forward to when she declared at the end of 2016 that she was working on a new project. The even more impelling news came about now that she showcased a painting that is posing as the muse to her book. The painting is by an artist whose name was Harmen Steenwyck who lived from 1612-1656. The painting is called “Still Life: An Allegory of the Vanities of Human Life”. The painting is a very intriguing one and is painted with oil on oak panel. It is a superb example of something called a Dutch ‘Vanitas’ painting. In a ‘Vanitas’ painting they place caution to not put a lot of stress on being wealthy and to abuse the pleasures in life because that will only lead to obstacles in the journey to redemption. In the painting we catch a glimpse of a Japanese sword and a sea shell (both shadow wealth). A scull is also exhibits worldly possessions. The painting is one that you could stare at mesmerized for hours. So the mystery continues but we be euphoric about the future because just by seeing her inspiration we already know that we are going to be in for a reading delight. 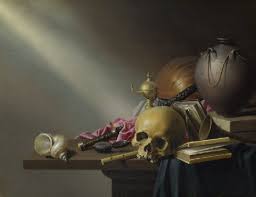 We use cookies to ensure that we give you the best experience on our website. If you continue to use this site we will assume that you are happy with it.I agreeCookies Policy